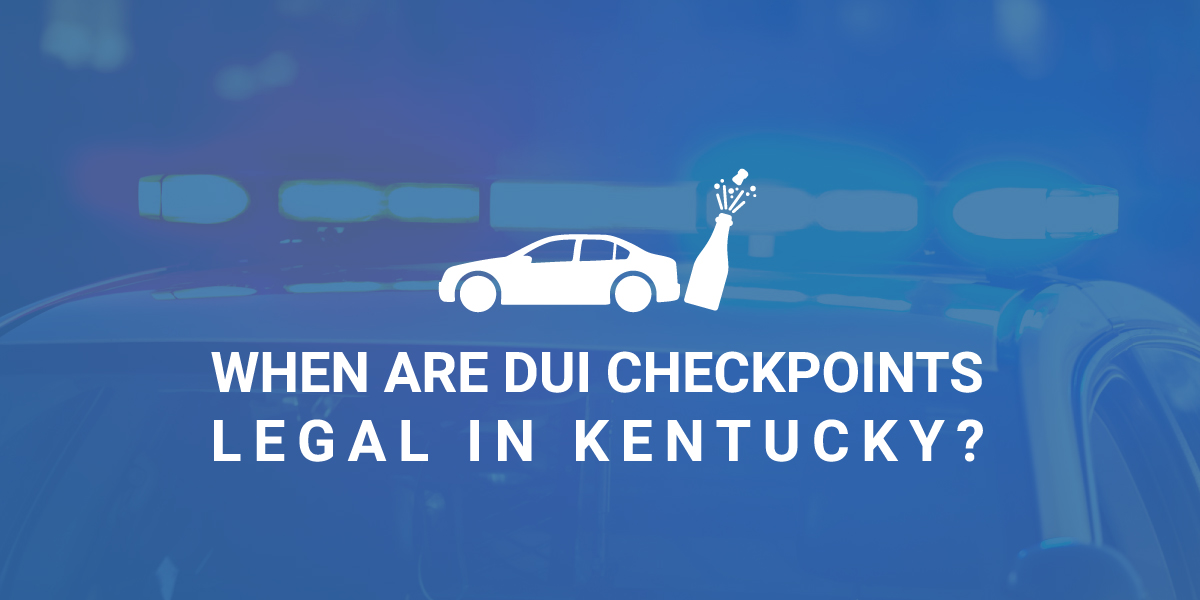 DUI checkpoints (also referred to as roadblocks or mobile checkpoints) are police traffic stops that are not tied to specific or individual suspicions. Officers use checkpoints to check for intoxication and impairment in an effort to prevent drunk driving accidents. Checkpoints are only temporary and the locations for checkpoints are selected at random. Checkpoints can be set up at any time, but they are far more common during holidays when more individuals are out drinking at bars and parties.

According to the CDC, sobriety checkpoints can reduce alcohol-related crashes by as much as 17%. However, the act of stopping everyone at an intersection runs against the American grain, especially when the Fourth Amendment protects against unreasonable searches and seizures. Are DUI checkpoints legal in Kentucky, and if so, when are they legal?

Typically, the law demands that an officer have reasonable and articulable suspicion to perform   a traffic stop. Under most circumstances, a stop without reasonable suspicion or evidence would be considered unlawful. However, the U.S. Supreme Court has ruled that the degree of intrusion involved in sobriety checkpoints is outweighed by the dangers of drunk driving. Thus, DUI checkpoints are an exception to the search and seizure provisions outlined in the U.S. Constitution.

Are DUI Roadblocks In Kentucky Legal At All?

Yes, DUI roadblocks or checkpoints are legal in Kentucky. The government has given law enforcement the okay to set up temporary checkpoints at random locations throughout the state. In most instances, the location of checkpoints are unknown, but you may be able to find a few using online tools such as duiblock.com or roadblock.org.

Of course, DUI checkpoints sit on a very fine line between what is legal and what is illegal. The government errs on the side of caution when it comes to granting citizens freedom from unreasonable searches and seizures. It’s not uncommon for a particular checkpoint to be ruled illegal by the courts.

DUI Checkpoint Requirements As Outlined By The Kentucky Supreme Court

In 2003, the Kentucky Supreme Court laid out a series of four requirements necessary for a DUI checkpoint to be legal. The requirements are known as the Buchanon Requirements and are as follows:

The court has noted that the four factors outlined aren’t exhaustive when considering the validity of a checkpoint. The court has also made it clear that violation of any one factor does not necessarily result in a constitutional violation. Still, failure to meet the requirements outlined above may render a checkpoint illegal.

If you’ve been arrested a DUI checkpoint, a criminal defense attorney can help fight to reduce penalties or have the charges dropped entirely. Your attorney can also investigate the checkpoint to determine whether or not it was conducted legally. Furthermore, when you work with Baldani Law Group, you’ll be working with a team of attorneys rather than working with one single attorney.

The lawyers of Baldani Law Group have over 100 years of combined legal experience. The only thing better than working with an attorney who will fight tooth and nail to protect your rights is working with a team of them. Contact us by calling (859) 259-0727 or filling out a contact form schedule an initial consultation.