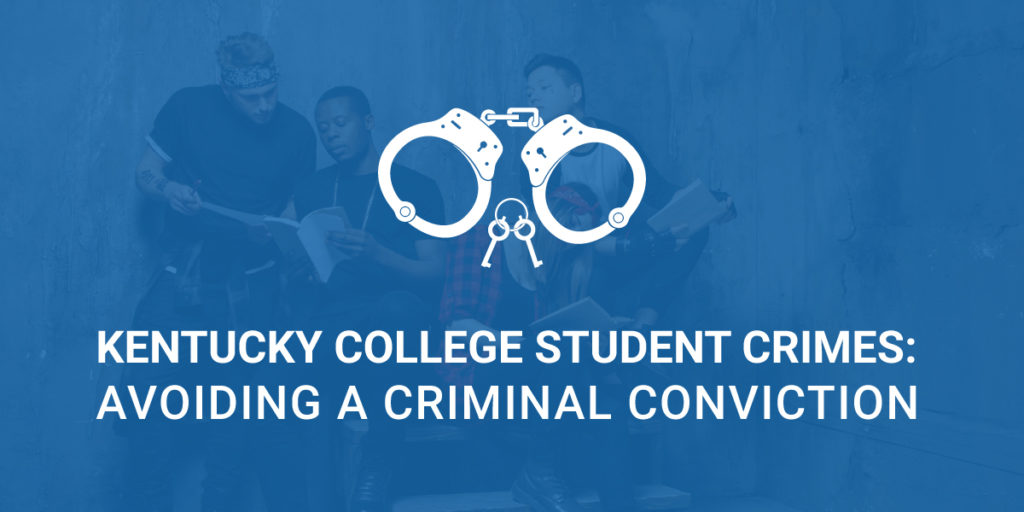 College should be one of the best times of your life — and for most students, it is. Yet sometimes the fun can go a little too far and may lead to criminal charges. If you have been accused of a crime as a Kentucky college student, you are likely all too familiar with the potential consequences. A criminal conviction may result in losing financial aid and student loans or even being kicked out school. It can also have a serious impact on your future.

There are certain Kentucky college student crimes that are more likely to be charged, such as driving under the influence, assault, possession of marijuana, and criminal trespassing. Under Kentucky law, each carries the possibility of serious penalties. Fortunately, with the assistance of a seasoned Lexington criminal defense attorney., you may be able to avoid a conviction — and to protect your future.

Driving Under the Influence

In Kentucky, it is against the law to operate a motor vehicle while under the influence of alcohol or drugs. Known as a DUI, a person can be charged with this offense in one of two ways:

The penalties for a first-time DUI include a $200-$500 fine, 2 to 30 days in jail, 90 days of an alcohol or substance abuse program, a license suspension of between 30 and 120 days, and a possible 48 hours to 30 days of community labor. For each subsequent DUI offense, the penalties increase. If you are under the age of 21, then you will face a 30 to 180-day license suspension, a $100 to $500 fine (or 20 hours of community service in lieu of a fine), and completion of a 90-day alcohol treatment or education program.

There are a number of ways to defend against a DUI charge as a Kentucky college student. Results from chemical breath or blood tests can often be challenged, and there may be explanations for why you may have appeared intoxicated or driven in an erratic manner. In addition, your Lexington criminal defense attorney may be able to negotiate a favorable deal based on your lack of a criminal history and other factors to help you avoid a DUI conviction.

The penalties for a misdemeanor assault charge range from probation to up to 12 months in jail, plus a fine of not more than $500.A skilled Lexington criminal defense attorney can work with you to put together a strong defense to this charge, including that you did not act intentionally, wantonly, or recklessly. Depending on the facts of the case, your lawyer may also be able to argue that you were acting in self-defense.

Although many states have legalized the use of marijuana in some form, it remains a controlled substance in Kentucky. It is unlawful to knowingly possess marijuana in Kentucky. The charge is a class B misdemeanor, punishable by up to 45 days imprisonment. More importantly for Kentucky college students, a marijuana possession conviction may render you ineligible for federal student aid, including student loans.

There are a number of ways to defend against marijuana possession charges. The law requires that the state prove that your possession was “knowing,” so if you were not aware that the drugs were in your possession — such as if your roommate left them in your dorm room or vehicle — your Lexington criminal defense attorney could argue that the charges must be dismissed.

In addition, if the marijuana was seized in violation of your constitutional rights, it could be grounds to have the evidence suppressed. Finally, a knowledgeable Lexington criminal defense attorney may be able to have the charge dismissed by working with the prosecutor and having you enter into a drug diversion program.

It isn’t unusual for Kentucky college students to be charged with criminal trespass. This crime is broken down into three degrees — first, second, and third — depending on the type of trespass:

If you have been charged with criminal trespass as a Kentucky college student, there are several possible defenses to the offense, depending on the facts of the case. This may include having the owner’s consent to be on the property, or that you did not intentionally enter the property. With the assistance of an aggressive Lexington criminal defense attorney, you can develop a factual or legal defense to achieve a favorable outcome for your case.

How a Lexington Criminal Defense Attorney Can Help

Baldani Law Group understands that in college, things sometimes happen — and we are here to help. Our Lexington criminal defense attorneys are highly skilled at developing smart, effective strategies to resolve cases. The lawyers of Baldani Law Group have more than 100 years of combined experience representing clients, including Kentucky college student crimes.

With an office in Lexington, we represent students from all local universities, including but not limited to:

Whether you are a Kentucky college student who has been charged with a crime or a parent who wants to protect their son or daughter, contact us by phone at 859-259-0727 or online to schedule a consultation.