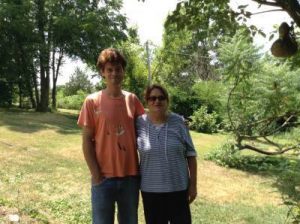 The Kentucky Free Press recently wrote up an excellent article detailing a case that we tried a few weeks ago in Clark County. At the heart was a young man, Joel Naselroad (pictured to the left, with his mom), who was shot by police officers after a bungled “knock and talk” over a report of (gasp) marijuana growing on his property. Here is how the piece gets started:

Joel Naselroad and his parents live just outside Winchester, Kentucky on a pretty, wooded 5-acre lot. There’s a pond with tame fish (they all come up when Joel whistles for them), a huge vegetable garden, several laying hens and a guinea, and a separate garden with an exotic array of peppers growing wild and hot. Among them is a Mexican pepper plant he’s nurtured for 8 years.

Further back on the lot were 3 Cannabis plants Joel grew for his own use. Like most Americans, he’s been on several different pharmaceuticals over the years. And like more and more Americans, he’s found that Cannabis replaces almost all of them with none of the addiction problems or dangerous side effects. In fact, one of his doctor’s recommended he use it.

There’s much more after the jump, including what was supposed to be a “knock and talk” wound up with police interrogating Joel’s mother while her son lay bleeding in the backyard after being shot by police (and then subsequently charged with three felony offenses — which Joel was acquitted of). If anyone doubts that we live in a police state, you need look no further than the case of Joel Naselroad.