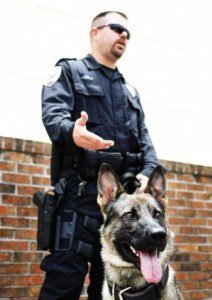 A study of drug dogs has confirmed what we in the criminal defense bar have known for a long time — that drug dogs are the equivalent of dowsing rods for drugs.

Or, in the words of Auburn University prof Lawrence Myers, a “search warrant on a leash.”

Of course, if you’ve ever been the victim of a drug dog-induced search, you probably already suspected this.

In 2010, a team of researchers at the University of California, Davis set out to test the reliability of drug- and bomb-sniffing dogs.

Here are the details of that study:

The team assembled 18 police dogs and their handlers and gave them a routine task: go through a room and sniff out the drugs and explosives.

But there was a twist. The room was clean. No drugs, no explosives.

In order to pass the test, the handlers and their dogs had to go through the room and detect nothing.

Although drug-sniffing dogs are supposed to find drugs on their own, the researchers concluded that they were influenced by their handlers, and that’s what led to such a high failure rate.

So 85% of the time when the dogs were taken through rooms with no drugs, they would indicate that drugs were present. In the field when a canine indicates that drugs are present (say, for example, in a car) then that automatically gives the police probable cause to search the car for drugs.

The study itself is actually from 2010, but is at the center of a new lawsuit filed by Nevada Highway Patrol troopers who allege that the use of the dogs is a blatant violation of constitutional rights.

In everyday use, though, when drug dogs indicate and no drugs are found after the police ransack your car looking for drugs the stock explanation is that the dog’s nose is so sensitive that it is detecting drugs that used to be in your car. Yeah, right:

That is significant, Lit said, because there were more alerts on target locations indicated by human suggestion — the construction paper — than at locations of increased dog interest — the hidden sausage and tennis balls. There also were alerts on a wide variety of other locations, indicating that the dogs were not simply alerting in the same locations where other dogs had done so.

Lit noted that in the early 20th century in Germany a horse named Clever Hans was believed to be capable of counting and other tasks. It was determined that Clever Hans actually was responding to the minute, postural and facial cues of his trainer or other observers. Similarly, detection dogs may be alerted to subtle human cues that direct dog responses without formal training, including pointing, nodding, head-turning and gazing.

In other words, drug dogs are walking probable cause.