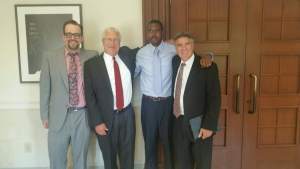 This week the team at Baldani Law Group scored a huge victory in the case of Commonwealth vs. Beasley. Our client — a whip-smart college student — was involved in a tragic accident in 2011 where his best friend was killed after he had lost control of his car. There was no sign of intoxication at all, and he cooperated fully with the investigation.

The Commonwealth took his blood, and when it showed that he had THC in his blood saw fit to charge him (a year later) with the death of his friend on the theory that he was intoxicated — despite published scientific articles demonstrating that you simply cannot tell whether someone is impaired based solely on the level of THC in someone’s blood.

Thankfully, the jury reached the only correct conclusion: that the accident was just that, an accident. Even still, that our client (or any person, for that matter) can be put in jeopardy of life and limb and be forced to defend himself against a half-cocked understanding of the science behind THC toxicology and an overzealous prosecution should be an outrage to anyone who values freedom.

Special thanks to Dr. Nelson who helped us blow the Commonwealth’s case out of the water.