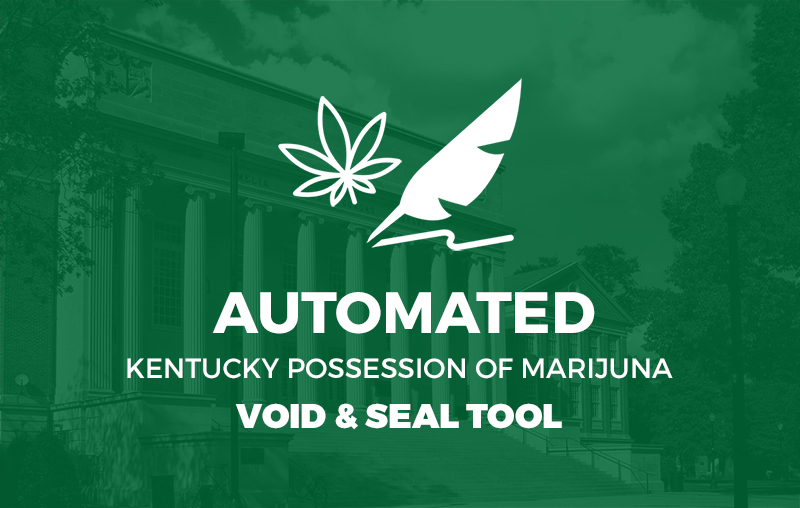 Attitudes toward marijuana have been changing as states across the country have pushed to legalize the drug. While Kentucky is not one of the 23 states to have currently legalized or decriminalized marijuana in some capacity, Kentuckian’s don’t appear to be opposed to the idea.

Something as small as a low-level drug conviction can have lasting impacts. Even with a great job and great credit, a conviction can prevent individuals from landing their dream home, receiving a student loan, or obtaining professional licenses.

Fortunately, individuals with a marijuana possession charge on their record can file a motion to have their convictions voided and sealed. Voiding has the same effect as expunging a conviction, so a record will be cleared of the conviction. An offender is only allowed to void a possession conviction once.

Create Your Motion To Void & Seal

Fill out the form below to create an automated motion to void and seal for your marijuana possession conviction under KRS  218A.276.

Am I Eligible to Have My Drug Possession Charge Voided?

If you are not eligible to have your possession charge voided and sealed, you may still be able to have the conviction expunged. Consult with a Lexington expungement attorney to find out if you meet the requirements for expungement and to start the process.

Why Should I File a Void and Seal Motion Instead of Seeking Expungement?

There are a number of reasons why you may choose to pursue a void and seal motion for a marijuana possession charge instead of expungement. First, expungement has a specific set of requirements, including that a certain amount of time has passed since your conviction (typically 5 years) and that you do not have a pending criminal case. A void and seal motion can be filed once you complete the term of your sentence, and even if you have a pending criminal case.

What Happens After I File a Motion to Void and Seal?

Once the court receives your motion to void and seal, it will review the terms of your conviction to ensure that you have completed your sentence or treatment successfully. If so, then it will “set aside and void” the conviction, and issue a certificate to you.

As part of this process, the court will order that all records related to your conviction be sealed. Every agency with records relating to your arrest, the charge, or matters related to the offense will be ordered to seal these records, and to certify to the court within 60 days that the records have been sealed.

What Are the Benefits of Voiding and Sealing My Marijuana Possession Conviction?

Having a criminal record can seriously impact your ability to move forward with your life. It isn’t unusual for employers, landlords, and mortgage officers to run background checks on applicants. As a result, having a conviction on your record can affect your ability to get a job or get an apartment or house.

Similarly, some misdemeanor drug offenses may make you ineligible for federal student loans. If you have that conviction voided and sealed, then you may be able to get student loans and complete your education.

Finally, many professional boards will not grant you a license if you have a conviction on your record. By going through the voiding and sealing process, you will be able to move forward with your career without being held back by a criminal record.