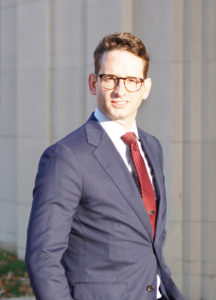 Bradley Clark is a criminal defense attorney practicing in Lexington, Kentucky. He is a partner at Baldani Law Group and the creator of Unconvicted.com, a web app that has helped nearly four-thousand Kentuckians with the Kentucky criminal records expungement process. His work has been featured in USA Today, The Atlantic’s CityLab, and the Wall Street Journal. Mr. Clark is a graduate of the University of Kentucky College of Law and a 2017 recipient of the College of Law Alumni Association’s Young Professional Award. In 2018 he was selected as the Kentucky Bar Association YLD Outstanding Young Lawyer. He also serves as Vice President of the Kentucky Association of Criminal Defense Lawyers.

Prior to joining Baldani Law Group, Bradley served as one of Kentucky’s ten full-time capital defenders, defending people accused of death-penalty crimes. Mr. Clark lectures on topics including Storytelling, DNA Evidence, and the future of the practice of law. He is a graduate of the Trial Lawyers College Death Penalty Program in Dubois, Wyoming on Gerry Spence’s Thunderhead Ranch. He also is a graduate of the Innocence Project/NACDL National Forensic Science College at Cardozo University in New York. In 2016 he was elected to the Board of Directors for the Kentucky Association of Criminal Defense Lawyers.

Bradley has tried over twenty criminal cases to juries, with most resulting in acquittals, including a full acquittal on Murder, Assault First Degree, and Wanton Endangerment First Degree.

Bradley lives in downtown Lexington and enjoys cycling, reading, and computer programming in his spare time.